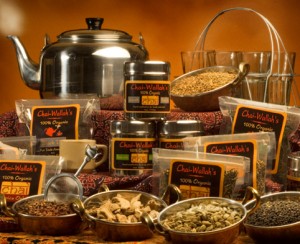 Chai from India is a sweet aromatic spiced milk tea, also known as masala tea, which is consumed by millions of

people each day, just as we in the West drink coffee.

Masala tea or chai is a blend of spices, the most common being cardamom, cinnamon, ginger, cloves, and black pepper, mixed with a rich black tea, milk, and a sweetener. This warming and soothing concoction, brewed by street vendors in India, called chai-wallahs, is boiled in a pan on the stovetop for a few minutes, then strained into a cup.

Neil Harley, a trained chef, has travelled extensively in his quest for adventure and culinary experiences. While backpacking in India, he sampled many cups of chai, each with its own unique blend of spice and tea. Many backpackers have fond memories of drinking chai so the true test of an authentic chai is its ability to conjure those instant pictures of where they were when they had their first chai! 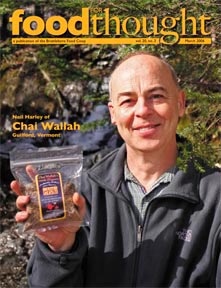 After exploring the spice bazaars of Rajasthan, and hundreds of cups of chai later, Neil decided to experiment with his own chai blend. He named his business Chai Wallah’s Real Chai in the hopes of alerting customers to this vital distinction between instant and pre-mixed chai. This is authentic Indian chai, a liquid meditation!

Chai Wallah is a Vermont Certified Organic Processor using 100% organic spice and Fair Trade Organic Teas. Neil buys his spices whole and grinds them in small batches to maintain freshness and potency giving his chai an intense aroma and flavor.

You can experience Chai Wallah’s chai in several ways. Neil sells his chai spice on its own for those who prefer to add their own tea or use the spice to flavor hot chocolate, rice pudding or even make ice cream. For those who like their tea and spice in one mix Neil offers the same spice blend with a full-bodied 100% organic Assam tea. Both can be purchased from the Brattleboro Food Co-op’s bulk department. At the deli juice bar Neil’s chai is available made with either soy or cow’s milk freshly brewed from the airpots. 4oz packets of chai are available at the deli counter. Now Neil’s chai blends are available throughout New England at a variety of stockists and over the WWW.

And exactly what is a Chai Wallah?
We’re glad you asked! This is a good summary.