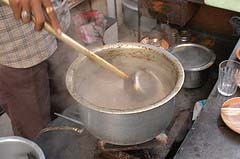 Chai from India is a sweet aromatic spiced milk tea consumed by millions of people each day just as we in the West drink coffee or tea. This is their drink of choice—which is fast becoming ours too!

Chai is a blend of spices (masala) the most common being cardamom, cinnamon, ginger and black pepper. These spices are added to a pot of boiling milk and water along with a robust black tea and a sweetener. (See recipes and hints for substitutions)

The spices can vary from region to region, household to household, and chai wallah to chai wallah. A “wallah” is the doer of the task, such as rickshaw wallah or lassi wallah (a yogurt drink often flavored with fresh mango).
The chai wallah generally makes his chai to order, setting his battered old saucepan over a kerosene stove, ladling in generous amounts of sugar to the boiling milk and water, then a pinch of spice and tea and sometimes a slice of crushed fresh ginger. This concoction is boiled for a few minutes and deftly strained into a jug and then into a small glass or a kullarh, a low-fired clay saucer and handed to you with pride.

This is the moment you have been waiting for after pulling an all-nighter on an Indian train or arriving at a bus station after a nineteen-hour bone-shaking ride… this moment of blissful merging with the Infinite, a washing away of one’s incredulity that one survived such a journey… at last, satisfaction for body and soul!

Chai has seen an explosive growth over the last ten years as people begin to look for a satisfying alternative to coffee lattes and cappucinos. Many large companies make chai in liquid concentrates or in flavored premixed packets….a far cry from our Chai Wallah on the street.

There is nothing more satisfying than making chai from scratch and it only takes a few minutes.
Become the doer of the task. Become a Chai Wallah, discover and experience the ritual of making your own chai the traditional way—it will spoil you for anything else!

Chai creates a wonderful uplifting, warming experience and these spices are known to improve digestion and generally increases one’s sense of well-being.*

* These statements have not been evaluated by the FDA. This product is not intended to diagnose, treat, cure or prevent disease