All classes of tea come from this same plant. The different classes of tea, e.g. black, green, oolong are the result of the differences in the tea manufacturing process. Most chai wallahs use the cheapest tea available which is dust tea or fannings. Fannings are pieces of tea leaves left over from the sievings that separate out the whole leaves and large pieces of leaves. Dust is what is left over from the fannings! These teas impart their flavor very quickly and can make a robust tannic tea, mainly used in tea bags. CTC or cut, tear, curl is a mechanical process which produces tiny spherical shaped particles of tea. Latest scientific studies have shown that Camellia Sinesis contains tea polyphenols which are powerful antioxidants that may play a leading role in lowering LDL Cholesterol with a subsequent decreased risk of heart disease.

Cinnamon
Darchini or taj; (Cinnamomum zeylanicum) used in rolled sticks or powder from the inner bark of cinnamon trea, aromatic sweet and pleasant flavor. Relieves nausea, flatulence, and diarrhea. Generally considered to be of better quality than cassia bark from C. cassia, a close relative.

Turmeric
Haldi or Manjal (Curcuma Longa) is a flowering plant of the ginger family with a warm, bitter, black pepper-like flavor.
Grows wild in the forests of South and South East Asia where it is collected for use in classical Indian medicine. (Ayurvedic).
It’s known for its antioxidant content and ability to work as an anti-inflammatory. This common culinary spice is prized in many cuisines around the world and with good reason.

* These statements have not been evaluated by the FDA. This product is not intended to diagnose, treat, cure or prevent disease

Do you wish to read more about the spice trade and the history of some of the spices that make up chai? We can help with that – Check out “Nathaniel’s Nutmeg” by Giles Milton, a fascinating read!
(Please note, the book may appear with a variety of covers.) 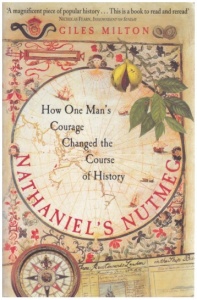 Synopsis: A true tale of high adventure in the South Seas. The tiny island of Run is an insignificant speck in the Indonesian archipelago. Just two miles long and half a mile wide, it is remote, tranquil, and, these days, largely ignored.

Yet 370 years ago, Run’s harvest of nutmeg (a pound of which yielded a 3,200 percent profit by the time it arrived in England) turned it into the most lucrative of the Spice Islands, precipitating a battle between the all-powerful Dutch East India Company and the British Crown. The outcome of the fighting was one of the most spectacular deals in history: Britain ceded Run to Holland but in return was given Manhattan. This led not only to the birth of New York but also to the beginning of the British Empire.

Such a deal was due to the persistence of one man. Nathaniel Courthope and his small band of adventurers were sent to Run in October 1616, and for four years held off the massive Dutch navy. Nathaniel’s Nutmeg centers on the remarkable showdown between Courthope and the Dutch Governor General Jan Coen, and the brutal fate of the mariners racing to Run–and the other corners of the globe–to reap the huge profits of the spice trade. Written with the flair of a historical sea novel but based on rigorous research, Giles Milton’s Nathaniel’s Nutmeg is a brilliant adventure story.